The vibration of the car engine when it is started is normal. This is because the movement of the machine when operated will produce vibrations. In addition to vibrations, you may also hear certain sounds.

However, what if the car engine vibrates when not running? You have to be alert. When the car is stationary, there should be no vibrations that arise because the car is not moving.

Then, how can the engine vibrate when the car is stationary? In order not to get even more confused, here are some sources of the problem with a car engine vibrating at rest.

How to Fix Car Engine Vibrating at Idle

The main cause of a car engine vibrating at rest is an error during adjustment. Mistakes like this can happen when you service the car. After repairing the damaged component, the technician will return the machine to its original condition.

However, sometimes during this return process an error occurs.
One of the most common mistakes is that the engine is not properly attached to the engine mount. As a result, the vibration of the car engine can not be muffled properly. 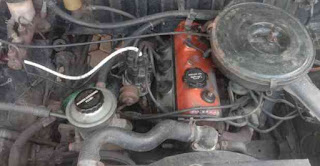 To prevent this from happening, you should do car maintenance at a trusted repair shop that double-checks before the car is ready to be used again.

Damage to the hood retaining rubber

The second problem has to do with the hood of the car. This one component has an important role for the car engine. The car hood serves to protect the car engine so that it is not exposed to interference from outside the car. In order for the hood to close completely, this component is equipped with a rubber stopper.

In addition to ensuring that the hood is completely closed, the rubber holder also functions to withstand engine vibrations. If the components wear out due to the heat from the car engine, the vibration will be difficult to suppress.

How to detect this problem is quite easy. Retaining rubber used will usually feel deflated. If the rubber holder is damaged, immediately replace it with a new rubber holder.

Well, the engine vibrates at idle it can be caused by damage to the engine mount.
If your car has experienced severe shocks, it could be that the engine mount's grip strength has decreased. As a result, the engine will shift when the car is running.

This shifting machine then causes vibrations. To overcome this, there is no other way than to fix the engine mounting so that the grip returns to normal.

Spark plugs are the tiny components that make up a car. Despite its small size, the function of the spark plug is very important for car performance. Spark plugs can also be a source of trouble when the car engine vibrates at rest.

In addition to spark plugs, the source of the problem when the car engine is stationary can also be caused by the piston. The pistons work in a continuous static motion to keep the car running.

But there are times when the piston becomes rocky so that its movement is disturbed. Disruption to the piston will then cause a decrease in engine power.

Pistons become rocky due to wear. How do pistons wear out? Usually this is caused by a driver who drives his car too often at high speed. The solution, of course, is to replace the worn piston with a new piston according to the type of your car engine.

The car engine vibrates at rest, it can also be caused by tire components, precisely on the tire wheels. Tire wheels on a car have a function as a support for the entire load of the car body. If the wheels are too old, then the resistance to withstand the weight of the car body is reduced. As a result, the engine will emit a vibration even when it is stationary.

If the tire rotation is not perfect, then the engine will vibrate. Are you having this problem? If the wear is not too severe, you can sand the axle. However, if the wear is severe, you should immediately replace the axle.

Tires are too worn

Tire axles and rims can indeed cause a car engine to vibrate, but the tires themselves can also be a source of trouble. This can happen if your car's outer tires are too worn and smooth. Car tires will indeed wear out and become smoother if used continuously.

In fact, worn tires can be dangerous but can also make the car engine vibrate. Therefore, make sure you regularly replace car tires when they feel too worn and have a lot of damage.

So that the problem does not get more complicated, immediately replace the damaged shockbreaker. Make sure you use an official shockbreaker that is compatible with the car engine. Avoid buying fake shockbreakers that can actually damage the engine.

Troubled propellers will make the car engine vibrate, precisely in the back. In severe cases, disturbances like this can even make the car run less balanced at low speeds and on straight roads. For that, immediately repair the damaged propeller components.

The source of the engine vibration problem can also come from the braking system. Brake linings that are already thin will cause braking to become less gripping. As a result, the car engine will vibrate, especially when the car is moving and then you brake suddenly.

To fix this, you must immediately replace the brake linings that have thinned out. Replace the old brake pads with new brake pads which of course match the specifications of your car engine.

The next source of the problem lies in the AC rotor fan. A damaged fan rotor will cause the AC fan to rotate abnormally. This abnormal rotation then makes the car engine vibrate.

Clutch bearings can be a source of trouble when the car engine vibrates at rest if it is about to run out. In a state that will run out or have thinned out, the clutch lining will make the flywheel surface uneven. Well, the uneven flywheel is what then causes the engine to vibrate.

What is the solution? You must immediately take the car to the repair shop. The technician will use a tool called a dial gauge to measure the height of the flywheel.

If the level of unevenness is severe, then the component must be replaced immediately. To prevent this from happening, it is best to replace the clutch lining regularly.

Fuel distribution is not smooth

Finally, engine shaking at rest can be caused by poor fuel distribution. This can happen to cars that use the injection system. A damaged injector will cause the fuel distribution to be not smooth and this is what then makes the engine vibrate even when it is stationary.

That's how to deal with a vibrating car engine. Hope it can help you.