Carp Livestock Cultivation Big Fast And Great Harvest - Carp cultivation whose commodities are always sought after in the market can be an option for those of you who want to start a business.

As a beginner, it is recommended to follow the steps for cultivating carp in the easiest way, and have the opportunity to get promising profits.

The market demand for carp is divided into two, namely the demand for consumption carp (gray orange and golden orange), and carp as ornamental fish with various or mixed patterns.

Here are the easiest goldfish cultivation steps for novice businessmen.

In the business of carp cultivation, of course, you have to think about the availability of land to be opened as a fish pond.

The easiest pool to make is a tarpaulin pool. Because, you don't need to dig the ground or build a pond with cement as raw material. It is enough to make a pool frame from iron wire, then form a pool with a tarp.

In addition, tarpaulins and iron wire can be used as supplies that can later be used for other needs, if you choose to stop raising goldfish. The cost of making a tarpaulin pool is also cheaper than others. 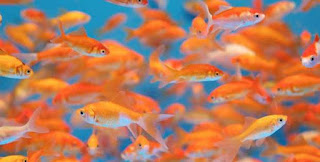 Something to note. Before adding fish to the pond, first clean the tarp until the plastic smell is gone. You can also rub the leaves to speed up the process of plankton emergence in the water. After that, fill the pond with water and leave it for two or three days.

It is recommended, the kola area is at an altitude between 150-600 meters above sea level. With a pool water temperature of 20-25 degrees Celsius, and a pH level of pool water around 7 to 8. Be wary of contamination of water sources from flood-prone areas.

Once the pond is ready, sow goldfish seeds that you can buy at a freshwater fish seed supplier. This process is easier than having to look for goldfish brooders. Because mating both parents and keeping the eggs to hatch perfectly is quite a complicated thing.

When buying goldfish seeds, make sure the quality of the seeds is reliable (from the best quality breeders), the size of the seeds is uniform, active, and free of disease. The size of goldfish fry is about 5 to 10 centimeters with a seed distribution of about 20 fish per square meter of pond.

Transfer of seeds to the pond must use a container. Because direct transfer will stress the goldfish and die.

3. Cultivation and Maintenance of Goldfish

After the goldfish seeds are stocked, the maintenance process must be carried out. Provide a feed mixed with prebiotics (known in farm stores as EM-4 fishery) and fish vitamins in the morning and evening.

Pool water quality must also be considered. Dirty water makes goldfish susceptible to disease and causes losses in carp cultivation. Oxygen supply and water flow in the pond must also be maintained consistently throughout the goldfish culture process.

Goldfish pests consist of fish predators, competitors that attack fish, and fish pests or diseases (caused by parasites, viruses, bacteria, or fungi) that transmit disease to other fish. You should monitor the health of your fish by doing regular checks.

Carp cultivation is carried out for 6 to 8 months from the time the seeds are spread. Goldfish can be harvested from 300 to 400 grams per head, and sorted by size.

The stages of the harvesting process for carp cultivation consist of draining pond water through pipes, then the fish are caught and transferred to shelters.

The selling price per kilogram of goldfish from direct farmers varies in each region, starting from Rp. 23 thousand to Rp. 40 thousand. For ornamental goldfish, the selling price is pegged per head with prices that vary, but can touch the price of up to millions of rupiah per head.

So, Carp Livestock Cultivation Big Fast And Great Harvest. Thanks