Kalipahit River and Waterfall Tour - If you travel to Ijen Crater, stop for a moment to witness the beauty of KALI PAHIT WATERFALL. The sloping cliffs are composed of natural volcanic rock. Water flows through rocky valleys creating rapids.

The setting is thick bushes, shrubs and trees. The first time they arrive, visitors are immediately greeted with the smell of sulfur...

The location of KALI PAHIT WATERFALL is at the foot of Mount Ijen, precisely in Kalianyar Village, Sempol District, Bondowoso Regency, East Java. The route to this waterfall is in the same direction as the Ijen Crater area which is famous for its Blue Fire Ijen tour.

Precisely near the first post before entering the Ijen Crater area, the distance is about 5 minutes. Kali Pahit Waterfall is not far from the highway, but is quite hidden because it is blocked by thick shrubs and shady trees. To access it, you have to enter from the front, near the main road.

In the front area there is land for vehicle parking, there is also a signboard containing information about the Kali Pahit Waterfall. From that area, you have to walk through a descending path. Don't worry, the distance is quite close, only about 50 meters. 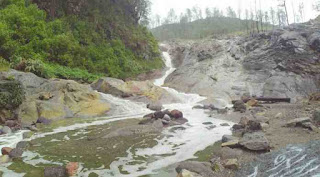 The price of admission is free, aka no need to pay, because Kalipahit Waterfall is open to the public. But lately, there are local residents who guard the front area. You can give a sincere nominal to the guard by putting it in the box they provide.

The Road to Kalipahit Tourism

On the way we visited the patient's house where we worked, when we stopped at KALI PAHIT WATERFALL. The term doesn't make sense, you've traveled a long way to get there, it's a shame to miss the beauty of Kali Pahit Waterfall.

Arriving at the location, we parked the ambulance that we were riding slightly inside so that it would not be seen from the main road. After that we went straight down to the waterfall, the trail bike driven by one of our colleagues also went down. This type of dirt bike is very flexible to be ridden in all terrains.

Unlike the waterfall which is usually perpendicular, the tiny KALIPAHIT River is only 150 meters high and has a gentle slope. Water flows along volcanic rocks that are elongated in shape. The water rapids are clear green.

This water color difference is due to the high sulfur content, which comes directly from Ijen Crater Lake and – which also contains a lot of sulfur.

The water in this lake has a high acidity (pH) with an acidity level of 0.6 – 0.8. It is said that it is one of the most acidic waters in the world.

Due to its high acidity, the water there also tastes bitter – even the names of these rivers and waterfalls were later called Kali Pahit (Sungai Pahit) and WATERFUN KALI PAHIT.

Of course, this water cannot be used for daily needs such as drinking, eating, bathing, and so on. Even though there is no warning board, Kawan Backpack visitors must be careful and not carelessly touch the water.

The smell of sulfur pierces the nose, sometimes faint. But when the wind blows strong enough, the aroma is sharp and very pungent.

At the bottom, white foam is formed due to the high acidity of sulfur. Foam like snow covers almost the entire surface of the water. When I visited KALI PAHIT WATERFALL, the flowing water was warm, as seen from the steam that came out of the water.

At one time the water in this rapids can also be cold. Water from KALI PAHIT WATERFALL will flow along Kali Pahit and will eventually empties into Belawan Waterfall. Then it meets with two other rivers, namely the Girimulya River and the Pedati River.

The Kali Pahit Waterfall area with a shady pine tree background adds to the beauty of the natural panorama. The minus, a lot of irresponsible hands that carve vandalism in the rocks there, it's a shame...

We climbed the gently sloping rocks to the top of KALI PAHIT WATERFALL. It is said that the scenery above is no less interesting. But unfortunately, the rocks are so slippery that we had to give up our intention, even though we were a little closer to the top of the waterfall.

We also took pictures around the waterfall, many unique and interesting spots for camera shots. But we weren't there long, apart from our limited time, a few minutes later after we got there, it started to rain quite heavily. We were quite wet from the rain. If it hadn't rained, we might have been there longer…

KALI PAHIT WATERFALL is a place worth visiting when traveling to/from Ijen Crater.